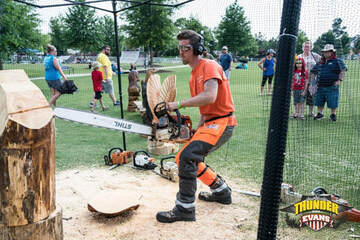 Chris Lantz is an internationally-award winning chainsaw sculptor from Georgia. Read on to learn how God has changed his life and his career.

​Back in 1989 a year before I was born, my dad and two uncles used to be real bad, party and do drugs. They started going to church in Melbourne, Florida, there they met a man named Ted Travers and Ted told them he felt he was being led by God to teach them how to chainsaw carve. I watched for 19 years before deciding to try it for myself and on December 5, 2009 I left my house with a trash bag of clothes, a twenty dollar bill, and a pack of cigarettes with only a dream; to become one of the best chainsaw carvers in the world. I moved to Columbus, Georgia to work with my cousin. I was under the impression that he had a shop and all the tools I would need, and an environment that would cultivate my skills as an artist, the truth was far different than I could have ever imagined. After a few days I began to ask him to work, I was starving and freezing and needed to make money so I wouldn't be. He just said, "The more and more you tell me to work the less and less I want to". He would run off with his girlfriend and leave me at his "shop" which was really just a vacant space in an abandoned flea market. For a week and a half I slept in an onion cellar on two church pews facing eachother on a feather mattress; cold and hungry. Something had to change. The next day I woke up and began to search for something to eat, to no avail. Then like a miracle, my other cousin, Mike, came into the door wearing his military uniform. He asked me what I was doing there and I told him that I was there to learn to carve, and explained my dilemma to him. Mike told me that if it did not get better, I could come live with him! Like a miracle I was saved! The next day I asked my cousin to work, and guess what, he didnt, so I called Mike. He came and got me, took me to his house and began to teach be how to carve when he had the time. He showed me how to "finish" a chainsaw carving and to carve a bear and a pelican. After one month of practice I was starting to catch on; that was when Mike informed me that he had to PCS to Fort Bragg, NC to begin his green beret training, he invited me to stay with him and I continued to study under him until the summer.
I can go on and on for days in extreme detail about my adventures up until this point of my life but I'll sum it up, you can ask me in person and I'll give you enough material to write a novel. I thought I was something when I was nothing, and ended up totaling my first truck in August of 2010, After that, I found myself in some trouble and had to stop carving for 8 months. At the end of that time Mike called back and said he would be willing to give me a second chance, and I started over again with one small chainsaw. Within 3 months I had my own truck again and all the tools I needed, eventually I stumbled across this little jewel called Lake Oconee, GA and have been here since August 2011. I surrendered my Life to Jesus Christ in April of 2012, and have since found my beautiful wife, Courtney..
It is clear to me how God had a hand in every single thing I have been a part of. I hope you enjoy the website and thank you for your time! The adventure continues...
March 7,2019- Hi guys! We needed to update this page and I have some spare time. In July of 2018, Courtney and I welcomed a beautiful baby girl named Evelyn. We bought a home near Clarkesville, Georgia in July also! We are hard at work right now on a project for a chamber of commerce in middle Georgia the reveal is going to be sometime in April most likely so stay tuned! Chris will also be beginning an on-site sculpture in Athens, Georgia this month. Orders are running about 8-10 weeks out right now so don't hesitate to jump in line!
~
SEPTEMBER 2021- This summer has been awesome! Check out our blog post about our 2021 competition experiences for a little window into our travels. We went to Pennsylvania, the Finger Lakes region of New York, Oregon, Washington, Iowa, Arkansas, and more this summer! Since our last update in 2019, we welcomed another baby to our family. Thank you all for following along and supporting my dream of being a self employed artist.

In 2019, we have demonstrated in some of the above places as well as
Asheville, North Carolina
Augusta, Georgia
Allentown, Pennsylvania
Ridgway, Pennsylvania
Norwich, New York
We will also be available near Clarkesville, Georgia when not at events.

PLACES WE HOPE TO GO: Clemson, South Carolina Greenville, South Carolina Hocking Hills, Ohio Lake Winnipesaukee, New Hampshire If you have suggestions on where we should take our artwork next, please email us or post it on our Facebook page.
Georgia chainsaw carver Chris Lantz is an award winning chainsaw artist living in North Georgia. He creates chainsaw carved bears, eagles, dogs, Native Americans, nautical themed pieces, and more!